Internet has changed the way information is relayed and how people use it. We have gone from an era of broadcast dominated by passive reception to an era of digital natives, where communication is interactive and instantaneous. This new generation has grown up with the Internet and expects continuous participation.

This evolution towards new communication patterns provided governments with an opportunity to function in a more innovative, engaging and cost-effective manner. In recent years, many businesses have integrated tools such as Facebook and Twitter in their marketing efforts to reach customers more directly. In a government context, such tools can be similarly used to engage with citizens with the goals of collecting their feedback and ideas, making them aware of public services at their disposal and reaching out to broader audiences through non-traditional channels.

Social media have also returned power to citizens. By providing inexpensive and widely-available tools that make it easier to organize and voice challenge, new technologies have contributed to empower citizens while improving governments’ responsiveness and accountability. A new citizen is emerging.

The convergence of these trends has generated a number of innovations presented in this paper. From ideation to agenda setting, from branding to crowdsourcing… the examples show that it is not about the tools, but about why and how we put them to work.

The purpose of this paper is not to serve as a template, but to provide highly successful examples of social media and government innovation that can serve as inspiration. In a time or rapid tech-driven innovation, no one example is fundamentally unique, but new technologies are providing a unique opportunity to make governments more innovative and cost-effective and to make citizens more engaged and goal-focused for the common good.

The authors of the white paper have created a very comprehensive summary of the features of each application. 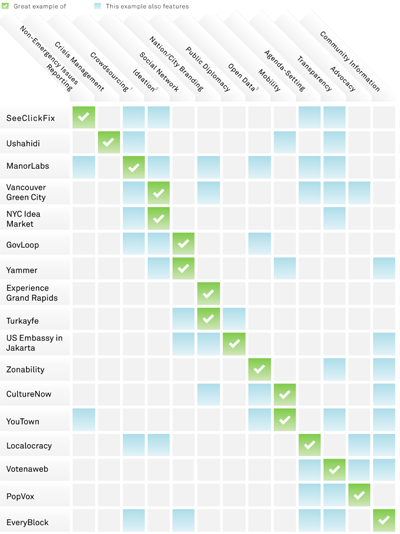