Thomson Reuters Top 100 Global Innovators program recognizes the 100 most innovative companies in the world, according to a series of patent-related metrics that get to the essence of what it means to be truly innovative.

According to the researchers patent activity has always been an indicator of innovation. However, innovation comprises much more than mere patent filing volume. As such, they developed a range of metrics based on various facets of innovation that relate to patenting and science. The Thomson Reuters 2011 Top 100 Global Innovators are companies that invent on a significant scale; are working on developments which are acknowledged as innovative by patent offices across the world, and by their peers; and, whose inventions are so important that they seek global protection for them. 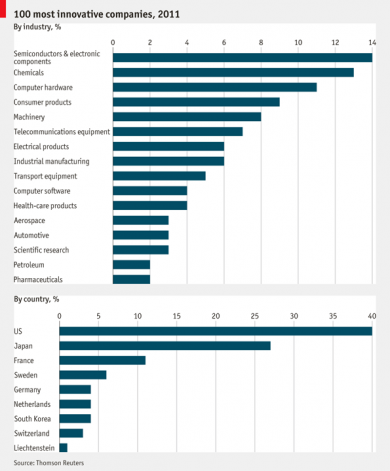 Of the 100 companies in the list, which is not ranked and relates to patent activity from 2005-2010, 40 are from America, 27 from Japan and 11 from France. No Chinese companies qualified. The report says this “underscores the fact that although China is leading the world in patent volume, quantity does not equate to influence and quality.”