By Panagiotis Tsarchopoulos on 6 December 2011. Posted in Cities 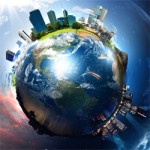 For the first time in its history, the TED Prize is being awarded not to an individual, but to an idea. The 2012 TED Prize is awarded to the City 2.0. The organizing team is bringing together a group of visionaries — urban planners, architects, technologists, authors, policy makers, and economists — to act as advocates for The City 2.0 and craft a wish capable of inspiring collaborative action by many.

For the TED organizing team great cities represent an incredible opportunity for a beautiful, sustainable future: