By Panagiotis Tsarchopoulos on 18 March 2012. Posted in Cities

The Economist Intelligence Unit, a sister company of The Economist, has devised a new index which ranks the competitiveness of the most prominent cities across the globe according to their demonstrated ability to attract capital, businesses, talent and visitors.

The index is an outcome of “Hot Spots” programme, an Economist Intelligence Unit research programme, commissioned by Citigroup. The research drew on two main initiatives:

The 120 cities in the index are home to some 750m people and $20.2 trillion worth of GDP, 29% of the world’s total. High concentrations of skilled residents, infrastructure and institutions mean that the top of the index is dominated by America and western Europe, with 24 cities in the top 30. Comparing the index to the EIU’s cost of living data (a measure of western-style living expenses), identifies those cities which also represent good value for money for the ambitious expatriate. 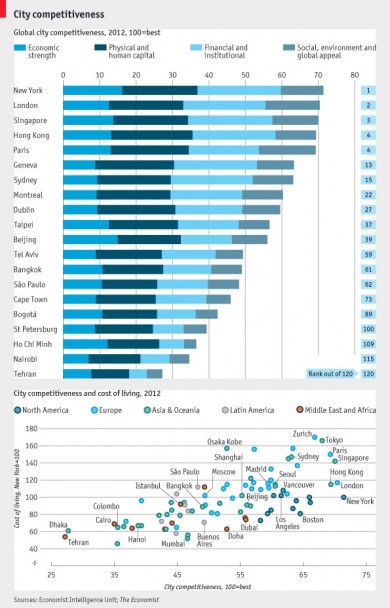