By Urenio Research on 23 April 2012. Posted in Collective Intelligence

A research project called Livehoods, from Carnegie Mellon University’s School of Computer Science, aims to shed some light on how people really inhabit their cities—and how this changes over time—by mapping data collected from 18 million Foursquare check-ins.

Livehoods offer a new way to conceptualize the dynamics, structure, and character of a city by analyzing the social media its residents generate. By looking at people’s checkin patterns at places across the city, they create a mapping of the different dynamic areas that comprise it. Each Livehood tells a different story of the people and places that shape it. Currently, Livehoods offers maps of three cities—Pittsburgh, the San Francisco Bay Area, and New York City. The group hopes to add more cities soon. Visitors can vote for ones they’d like to see mapped. 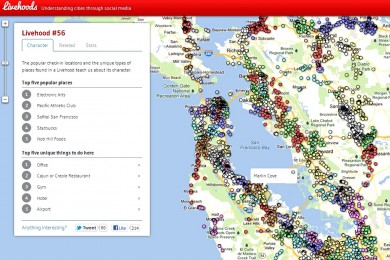 A caption of the San Fransisco Bay area from Livehoods

Each dot on the map (●) represents a check-in location. Groups of nearby dots of the same color form a Livehood. The shapes of Livehoods are determined by the patterns of people that check-in to them. If many of the same people check-in to two nearby locations, then these locations will likely be part of the same Livehood. By doing this, Livehoods reveal how the people and places of a city come together to form the dynamic character of local urban areas. Furthermore, by clicking on a Livehood, you can find out the Top five popular places and Top five unique things to do there.