The report, “Building a Digital City: The Growth and Impact of New York’s Tech / Information Sector”, features both an in-depth, quantitative analysis of New York’s technology sector and a qualitative study of the attributes that have enabled New York and San Francisco to become the nation’s two leading “digital cities”.

The tech/information sector includes tech start-ups, established tech companies, and major information companies such as Bloomberg L.P. and the New York Times Company. Without these pillars of the information economy — serving as clients, investors, sources of talent and ideas, and major employers of tech workers in their own right — the New York City tech boom could not have occurred. 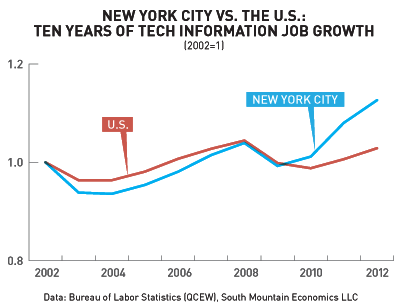 New York has long been recognized as the capital of finance, fashion, media, and the arts – and we now have the numbers to demonstrate what has become increasingly clear: New York is the country’s hottest and most dynamic tech capital. We’ve worked to foster the tech industry’s growth here, and that’s one reason why New York City has been a national leader in job creation,