The 10 Smartest Cities In North America

Boyd Cohen published for 3rd year a ranking of the smartest cities in North America. The ranking is based on the smart cities wheel framework, a visual guide that he uses to help frame the discussion of smart cities.

The smartest cities in North America for 2013:

The smart cities movement has really picked up steam in the past few years. It is beginning to come into its own and be defined by a much broader set of stakeholders than technologists who coined the term. The smart cities wheel, and this ranking initiative, seeks to expand the discussion by establishing a benchmark for what cities around the world are actually doing to get smarter. As I like to say, smart cities reflect a journey, not a destination–and hopefully this North American ranking and the forthcoming ones for Europe, Asia Pacific, and Latin America contribute to the journey of these cities while helping to engage citizens in the dialog. 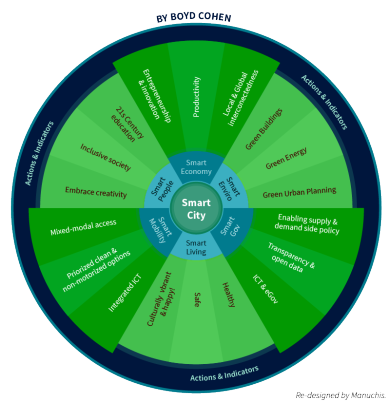 The 10 Smartest Cities In North America