By Panagiotis Tsarchopoulos on 21 December 2013. Posted in Videos on Intelligent Cities

In the 5 in 5 report IBM’s top scientists report on what the world, supported by smart sensing and computing, will look like in five years. Included in the report was a projection of the ultra-connected city where citizens and city government can easily communicate through technology and automation will allow for the massive population growth in urban areas.

The city will help you live in it

For citizens, smart phones enabled by cognitive systems will provide a digital key to the city. People can have fingertip access to information about everything that’s happening in the city, whether an experience is right for them, and how best to get there. Because these learning systems have interacted with citizens continuously, they know what they like—and can present them with options they might not find easily.

IBM created a storymap which visualizes the concept. 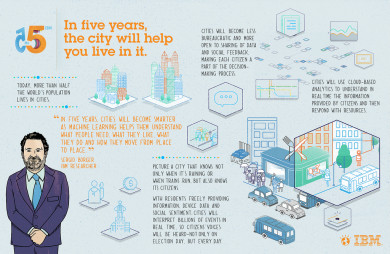