Mapping the European ICT Poles of Excellence: The Atlas of ICT Activity in Europe

By Panagiotis Tsarchopoulos on 15 April 2014. Posted in Innovative Cities & Regions

European ICT Poles of Excellence (EIPE) are geographical agglomerations of best performing Information and Communication Technologies production, R&D and innovation activities, located in the European Union, that exert a central role in global international networks. The EIPE Atlas presents the results of the empirical mapping of ICT activity in Europe and the ranking of the top European NUTS 3 regions based on their performance in EIPE Composite Indicator (EIPE CI), together with the ranks for the individual 42 indicators which contributed to the building of the EIPE composite indicators.

The report offers a snapshot of the performance of regions that are identified as the main locations of ICT activity in Europe. It is meant to provide a comprehensive picture of how ICT activity is distributed across Europe and where its main locations are. This information is expected to give a better overview of the European ICT landscape, activity and actors in each location and to reveal their strengths and weaknesses. 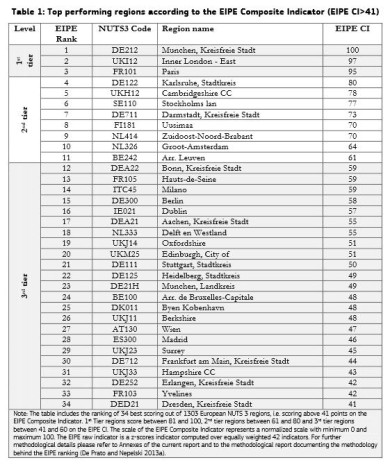 Three European NUTS 3 regions were identified that are considered as 1st tier regions, i.e. EIPE CI between 81 and 100 (see Table 1). These regions are:

Only a very small number of EU regions demonstrate intensive ICT activity, and a large share of the total EU ICT activity is concentrated in them (see Figure 3). The distribution of the values of the EIPE Indicator is visible in Figure 4. It shows that ICT excellence is
Concentrated in a relatively small number of regions. About 86% of European regions score less than 20 in the EIPE indicator. This concentration process is observable in all the indicators. 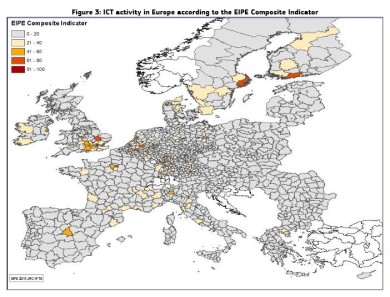 Strong clustering of ICT activity
Larger areas of intensive ICT activities, sometimes including a 1st tier region, are made up of several regions belonging to the same neighbourhood (see Figure 3). These agglomerated regions include half the top 34. The other half of the top 34 regions appear isolated (in geographical terms): mainly capital cities, several important locations of ICT R&D and a few remaining regions.