‘PlanIT Valley’ (originally 2011-2015) is a private, planned smart city to be developed east of the city of Porto, in Portugal. It is a model city of the future, where the software company ‘Living PlanIT’ will showcase its ‘Urban Operating System’ (UOS) on a real scale. The UOS is a modular smart city platform that Living PlanIT hopes to later sell in China and India to be used in other planned smart cities. The UOS platform gathers information from sensors placed throughout the city, which it then feeds to the applications that monitor and control the city’s systems. The majority of the platform’s applications will be delivered by Living PlanIT and its partner companies. The planned city is expected to be built in a series of phases and will eventually accommodate a population of 225,000 – mainly researchers and employees of Living PlanIT’s partner companies and their families. The city’s foundations will be made with pre-fabricated blocks that will come with all necessary smart infrastructures pre-installed. The buildings will be pre-fabricated, too, furnished with all necessary smart technology in advance. Furthermore, the buildings and neighborhoods of the city will have polygonal, plug-and-play type shapes, for a more recourse-efficient use of space. The finished city will serve simultaneously as a living laboratory for partner companies, test bed for their smart technologies, innovation center, incubator for technology start-ups, and an actual demonstration of how Living PlanIT will collaborate with its partners and property developers to replicate its approach in other locations. PlanIT Valley is endorsed by the Municipality of Paredes and has been designated a ‘Project of National Interest’ by the Portuguese Government. However, the project has not commenced yet due to funding difficulties. 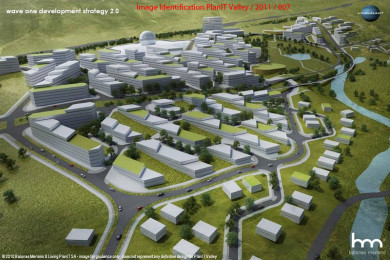 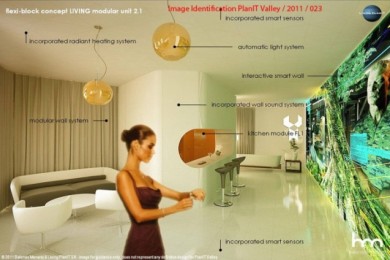