In its quest to diversify its economy, attract foreign investment and tackle unemployment, the Kingdom of Saudi Arabia (KSA) embarked on developing four new ‘economic cities’ under the principles of smart city planning. The new cities are overseen by the Saudi Arabian General Investment Authority (SAGIA), a governmental agency established in 2000 to act as a gateway to investment in the KSA. King Abdullah Economic City (KAEC) is the first out of four intelligent cities to be developed in the KSA. It is located on the Red Sea coast, about 100 km north of Jeddah. It spans an area of 168 km², expected to host a population of 2 million people. The venture’s vision is to create ‘a world class, fully integrated economic city’, focusing on manufacturing & logistics, shipping, light and processing industry and financial services. The development cost is approximately $27 billion. The masterplan initially had the following main components: (a) Industrial District, (b) Sea Port, (c) Resorts’ Area, (d) Educational Zone (e) Residential Area and (f) The Central Business District (including the Financial Island). However, the Financial Island, a very ambitious project in itself, was cancelled. The city’s master developer is Emaar, The Economic City. On the governmental side, the Economic Cities Authority is the prime development facilitator; it acts as the one-stop Government servicing center for the development of KAEC. In matters of smart city infrastructure, CISCO will undertake the design and implementation of the network infrastructure and connected city services; the city will be wired with high-speed broadband infrastructure, while all urban operations will be managed through Integrated Operations’ Centers, meant to act as the ‘brain of the city’. The project started in 2006, with a projected completion date in 2020 which was extended to 2025. Its development has not been always effortless, resulting to changes in the original masterplan and construction timeline. At the moment, construction is advancing in several sites, at varying stages of development. 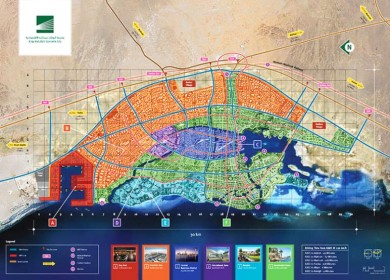 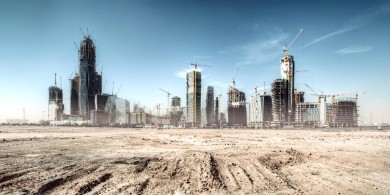