By Panagiotis Tsarchopoulos on 18 February 2015. Posted in Innovative Cities & Regions

“Innovation in European Cities” report, published by LSE Cities, sets out the context for Bloomberg Philanthropies’ European Mayors Challenge. It gives an overview of the key themes facing European cities today and provides an independent analysis of the 155 submissions to the award and a detailed review of the five winning proposals.

The submissions from 155 cities demonstrated a predictably wide spectrum of responses to the call for innovation in urban governance aimed at solving local challenges and improving quality of life. In order to better understand the key issues addressed by each city and to support the process of evaluation, LSE Cities identified five core themes that captured the concerns of European citizens and local governments in this self-selected group of cities. These themes are: the economy; civic engagement; social inclusion; health and well-being; and the environment. The themes provide important insights into the perspectives of the leaders who participated in the European Urban Society. 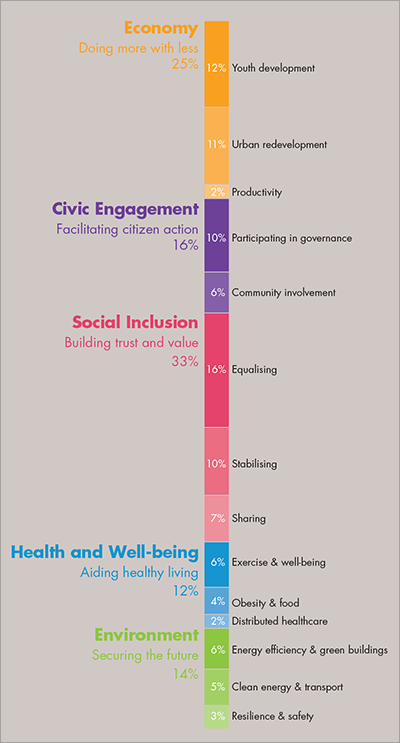 The report is organised into four parts. The first offers an overview of global dynamics in an urban age, the second identifies the key themes addressed by the submissions for the award and the third focuses on the five winning proposals. The report concludes by offering a series of reflections on what the European Mayors Challenge tells us about some of the key issues facing city governments across Europe today, and what lessons might be drawn from the Challenge, worldwide.