By Panagiotis Tsarchopoulos on 27 October 2015. Posted in Innovation Measurement

The Global Creativity Index (GCI), created by the Martin Prosperity Institute, is a broad-based measure for advanced economic growth and sustainable prosperity based on the 3Ts of economic development — talent, technology, and tolerance. It rates and ranks 139 nations worldwide on each of these dimensions and on the overall measure of creativity and prosperity.

Australia takes the number one ranking on the GCI, supplanting Sweden, which took top spot in the previous 2004 and 2011 editions. The United States is second (maintaining its previous ranking). New Zealand is third, Canada fourth (up three spots from its previous ranking), with Denmark and Finland tied for fifth. The rest of the top ten includes Sweden in seventh, Iceland eighth, Singapore ninth, and the Netherlands tenth. 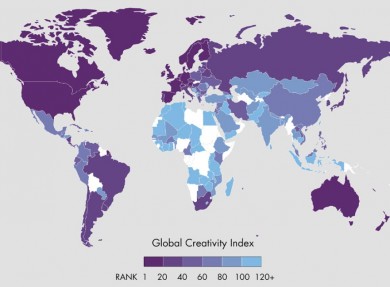 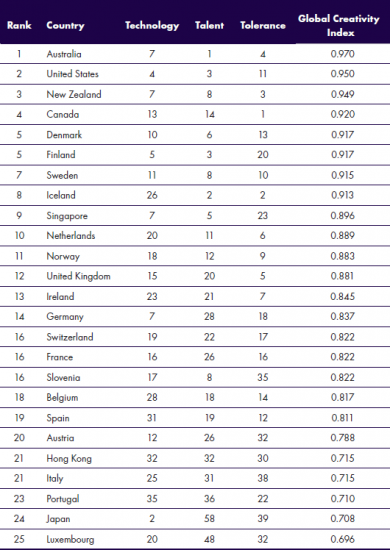 The three dimensions of creativity are described as follows:

Talent: Australia leads in talent. Iceland is second. The United States and Finland are tied for third with Singapore in fifth. Denmark, Slovenia, Belarus, New Zealand, and Sweden round out the top ten.

Tolerance: Canada takes the top spot in tolerance which we measure as openness to ethnic and religious minorities and gay and lesbian people. Iceland is second, New Zealand third, Australia fourth, and the United Kingdom fifth. The Netherlands, Uruguay, Ireland, Norway, and Sweden round out the top ten.

Via: Agenda – The World Economic Forum