By Panagiotis Tsarchopoulos on 20 January 2016. Posted in Innovative Companies

The 5th annual Thomson Reuters Top 100 Global Innovators showcasing the world’s 100 most innovative organizations by analyzing patent and citation data across four main criteria: volume, success, globalization and influence. Top 100’s commitment to innovation and dedication to ongoing R&D are drivers of economic success, not only for them but also for the countries in which they reside

The major findings of the research are the following: 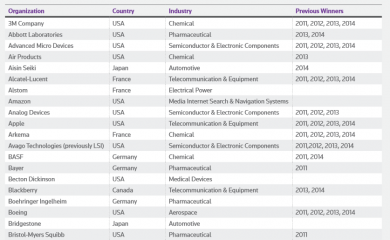