IDC Government Insights went through a six-phased benchmarking process to determine the Top Smart City projects for 2016. The process included identifying and cataloging the key Smart City projects in Asia/Pacific by IDC Analysts across APeJ (25%), online voting to determine public opinion (50%), and the assessment of an International Advisory Council (25%). 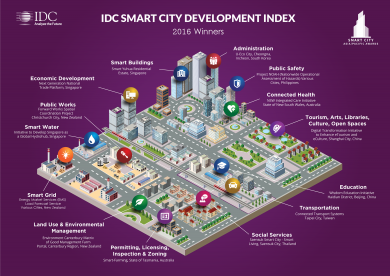 The smart city momentum is growing extensively in the Asia Pacific region as many nations see it as an organic, bottom-up and middle-out innovation growth that will spearhead the next cycle of eGovernment evolutions. While at least 90 per cent of all AP local governments or smart cities’ growth leverage funds are provided by central or federal functions, many of them are notably given the autonomy to create their own unique identity in city governance, strategic operations and provisioning of effective e-services.