By Anastasia Panori on 25 August 2016. Posted in Innovation Measurement

Ericsson and Network Society Lab have published the 2016 edition of Networked Society City Index. This index ranks cities based on their ICT level of maturity and their performance in terms of sustainable urban development. According to this report, cities play and will play an essential role in the developmental processes in the following years, due to their continuously increasing importance.

The world is entering a new era, where the economic and political importance of cities is growing rapidly. Today, the majority of the world’s population lives in cities, and urban concentration is accelerating. Therefore, cities are vital for solving major social, environmental, and economic challenges.

ICT is considered to be a key component during this process through three main channels. First, it offers practical benefits to billions of people every day. Secondly, ICT produce a large number of capabilities, by introducing sustainable solutions, especially to developing societies and people living there. Last but not least, ICT provides an innovative environment open to everyone. 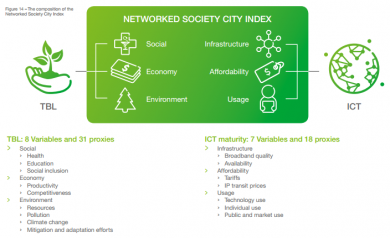 Stockholm is placed at the first place of city ranking, according to this report, followed by London, Singapore, Paris and Copenhagen. A significant correlation also seems to be present between ICT maturity and other socio-economic parameters, such as productivity, competitiveness, health, education and gender equality. 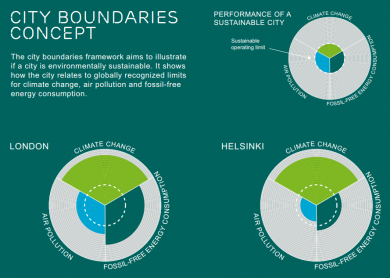 The composition of the index is based on three main dimension: society, economy and environment, each one of which covers a number of sub-domains, as shown in the figure. Finally, a city boundaries framework has also been developed, aiming to illustrate if a city is environmentally sustainable.

You can read the full report here.