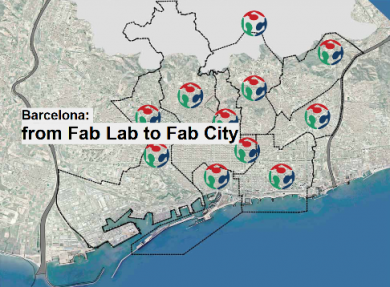 FAB City is a project launched in 2011 by the Institute of Advanced Architecture of Catalunia, the MIT Center for Bits and Atoms and the Fab Foundation. It is a global project aiming at the development of a new urban model for locally productive and globally connected self sufficient cities.

It is a decentralised and open format project that transform and shape cities depending on how they source and use materials. This means that more production occurs inside the city, along with recycling materials and meeting local needs through local inventiveness.

In a FAB City, citizens are empowered to be the masters of their own destiny, their resilience is increased and a more ecological system is developed because movement of materials and energy consumption is drastically reduced.

This shift in the way materials are sourced and used is described as a shift from PITO (Products In Trash Out) to DIDO (Data In Data Out). The first one is the actual model, in which products are imported to the cities that then export huge quantities of waste. With the new DIDO model, a city’s imports and exports would mostly be in the form of bits (information) and most of the atoms would be controlled at the local level. In other words, import and export activites of the city would be focused on data -information, knowledge, design and code- and no materials would travel around the world in fossil fuel transportation.

From PITO to DIDO.

The project is focused on the following strategies:

The project operates within the Fab Lab network, using it as a global infrastructure and knowledge source for the radical transformation on how people work, live and play in the cities. The initiative is open for cities. towns or communities to join in order to collectively build a more human and inhabitable new world.