Shedding light on energy in the EU: A guided tour of energy statistics

By Artemis Psaltoglou on 20 September 2016. Posted in Uncategorized

Shedding light on energy in the EU – A guided tour of energy statistics is a digital publication released by Eurostat on 20th September 2016, with the aim at making the complex process of energy more understandable. This digital publication serves in particular those who would like to better understand the challenges faced by the Energy Union, one of the ten priorities of the European Commission.

By providing simple statistical answers to these questions and by presenting the information in in a user-friendly way through short texts, dynamic infographics, maps, videos, animations, graphs, photos, this new tool developed by Eurostat replies to the needs of those who are not familiar with the energy sector, but who would like to better understand the challenges the Energy Union initiative is facing. For more experienced users, the whole energy process – from source to final use – is presented in a very detailed way in a user-friendly Sankey-diagram. All information is available for the European Union as a whole, but also for the 28 Member State.

The main core of this digital publication consists of four blocks of questions, those which citizens would most frequently ask:

This part gives an overview of the five dimensions of the Energy Union. It includes a video where Vice-President Maroš Šefčovič and Commissioner Miguel Arias Cañete explain EU policy.

This sections describes where the energy in the European Union comes from, meaning what is produced in the EU and what is imported. The imports are visualized in interactive flow maps while the energy flows, from source to final use, are described in a very detailed way through interactive Sankey diagrams. From this section, readers will learn for example that in 2014 the EU depended on energy imports for 53% of its consumption, ranging from below 20% in Estonia, Denmark and Romania to over 90% in Malta, Luxemburg and Cyprus. 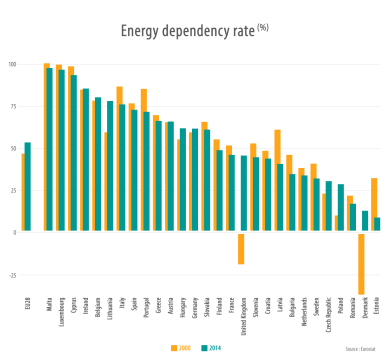 This chapter gives information on what kind of energy is consumed in the EU and what sources are used for electricity. Another part deals with how much electricity and gas cost for households and industries.
The different sources used to produce electricity are shown in an animation and energy consumption is presented through an interactive visualization tool. An interesting figure from this part shows that petroleum products accounted for 40% of energy consumption in the
EU in 2014, ranging from below 30% in Slovakia, Finland, the Czech Republic and Sweden to over 65% in Cyprus, Luxembourg and Malta.

Share of energy products in total final energy consumption, in %, 2014

This part presents how greenhouse gas emissions are evolving and how different sources contribute. It also shows the share of renewables in energy consumption and how efficient the consumption of energy is in the EU. The different types of renewable energy are explained in an animation. An interesting figure from this chapter shows that 16% of energy consumed in the EU in 2014 came from renewables, varying from below 5% in Luxembourg and Malta to over 50% in Sweden. 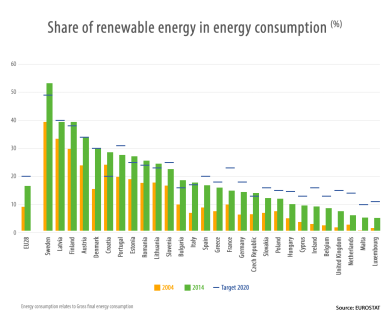