RSPI: A Measure of Social Progress in the EU Regions

By Artemis Psaltoglou on 14 October 2016. Posted in Innovative Cities & Regions

The European Union Regional Social Progress Index aims to measure social progress on 50 indicators across the 272 regions of the EU member states as a complement to traditional measures of economic progress. It is a collaborative project carried out by the Social Progress Imperative, Orkestra (a research institute on competitiveness in the Basque region) and the Directorate-General for Regional and Urban Policy of the European Commission.

Social progress is the capacity of a society to meet the basic human needs of its citizens, establish the building blocks that allow citizens and communities to enhance and sustain the quality of their lives, and create the conditions for all individuals to reach their full potential.

The above definition, by the Social Progress Imperative, alludes to three broad elements of social progress referred to as dimensions: Basic Human Needs, Foundations of Wellbeing, Opportunity. Each of these dimensions is further broken down into four underlying components, as shown in the figure below. 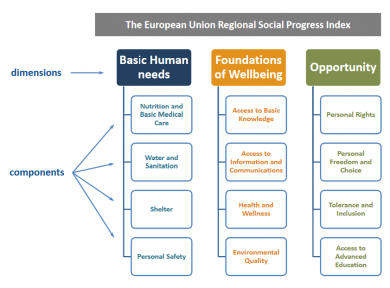 The Index builds on feedback from public and experts in the field alike. The draft version was released in February 2016 for public review. Prior to this release, DG Regio and Social Progress Imperative co-hosted a committee meeting of experts in the field of wellbeing and social indicators, with representatives from OECD, Eurostat, Bertelsmann Stiftung, DG Employment, and a number of academic institutions. Feedback was collected from both of these activities and the final version of the Index addresses some of these issues.

All the twelve components included in the Index cover issues that show significan variations within EU memer states. We are used to observing sometimes radical differences across the EU regions (especially between urban and rural areas) in terms, for example, of access to health care, quality and affordability of housing, personal safety, access to higher education and ICT or environmental pollution. The following image presents the indicators of social progress for the greek region of Central Macedonia. 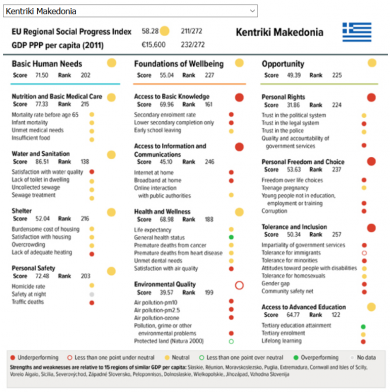 Measuring social progress can inform the development strategies of EU regions. This new regional index is intended to: