By Artemis Psaltoglou on 4 November 2016. Posted in Uncategorized

This report Eurostat Regional yearbook 2016, published by Eurostat on September 2016, provides a detailed picture relating to a broad range of statistical topics across the regions of the EU Member States, as well as the regions of the European Free Trade Association (EFTA) and candidate countries.

Each chapter presents statistical information in maps, figures and tables, accompanied by a description of the policy context, main findings and data sources. Regional indicators are presented for the following 12 subjects:

In addition, two special focus chapters are included in this edition: a focus on commuting patterns between regions and a focus on regional population projections.  Two additional tools from Eurostat, Statistical Atlas and Statistics Explained are also presented in the report.

Various functionalities are offered to view the details of the map display:

The Statistical Atlas contains all the maps from the Eurostat regional yearbook sorted by publication themes and chapters. 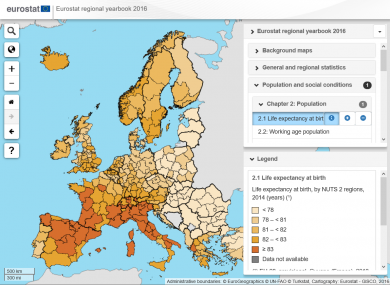