By Artemis Psaltoglou on 18 November 2016. Posted in Innovation Clusters

Under the slogan “One more hour a day”, the city of Helsinki has initiated the development of a district, Kalasatama, that aims to manage time more efficiently. Considering time as one of city residents’ most precious resource, the vision of Smart Kalasatama, created together with local residents and other stakeholders, is for everyone to gain an extra hour of free time every day.

The vision: One more hour a day

The program was initiated by the City Council in 2013 and the initial goal was that it should become the model district for smart living. Τhe district incorporates digital services, sensors and IoT in the infrastructure as well as provides a new kind of urban services. The idea of all this technology is to build a district smart enough that every resident will save one hour every day for their own time. Valuable time is spent daily on queuing up, grocery shopping and commuting. Smart services improve both quality of life and time management.

Time is saved by improving the flow of traffic and logistics, as well as guaranteeing first-rate local services and flexible facilities for remote working. The extra hours can be spent on activities that bring happiness, whether that means relaxing in the local park, cooking with your children, studying or dance classes. The objective is to deliver services to people rather than vice versa, reducing daily commuting.

A test bed for smart urban services and infrastructure

The smart district is being developed through experimenting, information and communications technologies (ICTs) and the use of data. Its portfolio include among others:

To test and develop services, Kalasatama has elaborated an agile piloting program in order to accelerate innovation by procuring prototypes to real city environments to be co-created with citizens. As Veera Mustonen, the head of Smart Kalasatama says [1],

In Kalasatama district or even elsewhere in Helsinki we are not building only one smart city platform. Rather we are experimenting with different kinds of service solutions and hoping to understand which ones will apply for the future. In the district the biggest technological platform that is planned and already implemented in some parts is the smart energy system which is built on top of the district heating and cooling. 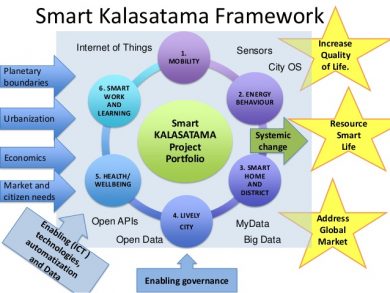 It will be fully developed by 2030 to house 20,000 people and provide 8,000 jobs but already has 3,000 pioneering residents living in it [2]. Construction in the district is ongoing and encourages the piloting of very dynamic endeavors.

Kalasatama’s growth is a result of the cooperation between city authorities, companies, citizens and other stakeholders. The city owns all the lands and leases them to investors with an eye to private investment and a push to get private parnters to provide new services.

Co-creation is a core concept in Smart Kalasatama whose residents play key roles as testers of local smart services and initiators of sustainable, resource-efficient lifestyles. Acccording to Veera Mustonen, the head of Smart Kalasatama, the most difficult group to engage are the citizens. However, Kalasatama created different models and ways to integrate them in the design and the development of the district. For example, the city has developed a co-creation platform called Helsinki Loves Developers and co-organizes hackathon programming marathons and open data apps competitions. 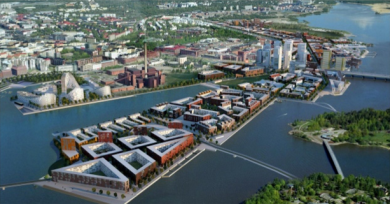