Report – Innovation and the City

By Panagiotis Tsarchopoulos on 22 November 2016. Posted in Innovative Cities & Regions

Drawing on well over 100 interviews with urban policy experts in the United States and around the world—including mayors, city commissioners, academic experts, corporate executives, labor officials, and philanthropic leaders—this report profiles fifteen of the boldest and most innovative municipal policy reforms of the past decade.

The fifteen policies detailed in the report include San Francisco’s Five Keys Charter School, the only charter school in US embedded inside a city’s correctional system; Seattle’s innovative Race and Social Justice Initiative, which established a more inclusive process for municipal policymaking; Barcelona’s Reempresa program, a rare economic development program focused on small business succession; Los Angeles’ new model for integrating workforce and educational services for youth; São Paulo’s innovative plan to capture value from new real estate development to help cover the cost of infrastructure improvements; and a path-breaking initiative from Malang, Indonesia, which uses revenue generated from garbage and recycling collection to fund comprehensive healthcare for low-income residents. Other ideas run the gamut from a crowd-sourced mapping project in the slums of Nairobi, Kenya, to a novel integration of the public housing authority and school system in Tacoma, WA, demonstrating the broad range and scope of city initiatives explored in this report. 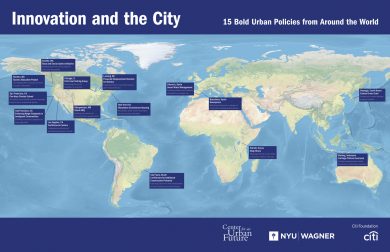 In publishing this catalogue of the best urban policy reforms that have been tried and proven effective, our hope is that city officials around the world won’t have to reinvent the wheel when designing new programs and initiatives to solve some of their cities’ biggest challenges. Instead, they’ll be able to draw inspiration from successful programs and initiatives launched by their peers. The fifteen policies profiled in this report may not work in every city, and each will need to customize these ideas to suit their particular locale. But taken together, the report presents the “art of the possible” for city leaders committed to wide-ranging and broad reaching improvements.

The report is created by the Center for an Urban Future, one of New York’s leading think tanks, paired with NYU Wagner, a public service graduate school known for blending theory and practice. The entire project has been supported by Citi Foundation.