By Artemis Psaltoglou on 16 December 2016. Posted in Collaborative Innovation

Participatory Budgeting (PB) is a democratic process in which ordinary residents decide how to spend part of a public budget. In the United States, PB is among the fastest growing forms of public engagement in local governance, having expanded from one city council district in 2009-2010 to 47 council districs with active PB processes in 2015-16. Sections 1, 2, 3 and 5 of the report are based on interviews with officials who had implemented PB processes and section 4 on interviews with officials who had not. The report concludes with recommendations for national and local stakeholders who seek to strengthen and spread PB. 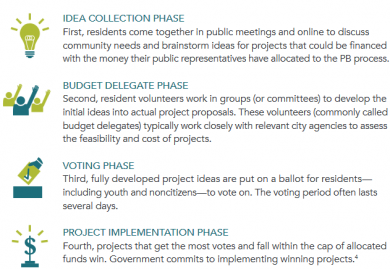 Officials who implemented PB typically saw it as a chance to get more constituents excited about local politics and to educate them about how government works. Most also said they expected PB to increase their popularity with constituents.

2. Impacts on participants, communities and governments

The need for adequate time, money and staff to implement PB was a challenge cited by most officials who had adopted PB. Several discussed the challenges of ensuring their processes were not dominated by the most advantaged groups in their jurisdictions. Explaining the process effectively and responding to residents’ criticisms and concerns were also common themes.

4. Reasons for not adopting PB

Officials who had not adopted PB often saw themselves as already sufficiently attuned to constituents’ needs. They often worried about resources for implementation if they did decide to adopt PB. Several said the budgets typically allocated to PB are too small for projects to have much impact.

5. The future of PB in the United States

Securing more resources for implementation is important for PB’s future, most officials who had adopted the process agreed. At the same time, some suggested ways to make implementation more efficient. Several also suggested PB must expand beyond capital budgets, and that the budgets allocated to it should be larger if PB is to affect communities and government meaningfully over the long term.

Funded in 1975, Public Agenda is a non-partisan, non-profit organization that helps build a democracy that works for everyone and fuels progress on critical issues, including education, health care and community engagement.