By Panagiotis Tsarchopoulos on 23 March 2017. Posted in Innovation ecosystems

Startup Genome assessed 55 startup ecosystems across 28 countries and unveils insights from 10,000+ startups including: 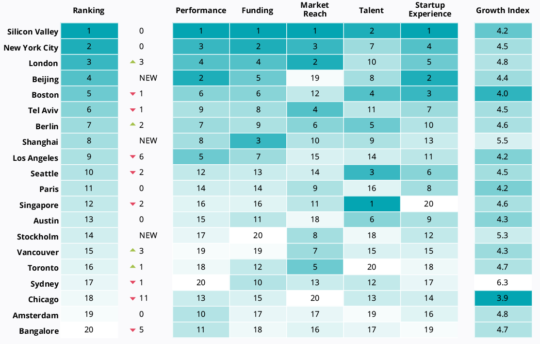 Among the top 20 startup ecosystems, nine are located in North America, six in Europe, with the remaining five in Asia. This compares to ten and six respectively for North America and Europe in our 2015 ranking. Nonetheless, there was considerable movement within the top-ranked ecosystems.

The biggest upward movement was Stockholm, which entered the top 20 with an impressive 14th place, thanks to its high Market Reach and amazing ability to create unicorns despite its small size. London moved up to the number three overall rank, and Vancouver moved up three spots to the 15th spot. Two Chinese cities, Beijing and Shanghai, were assessed for the first time and took the 4th and 8th position respectively.

Silicon Valley continues to dominate overall, ranking first in Performance, Funding, Market Reach, and Startup Experience. It ranked third globally in Talent, behind Moscow and Singapore. In some areas, detailed below, Silicon Valley fell behind other ecosystems, likely reflecting its maturity in development. The surge in the rankings by Beijing and Shanghai reflected strong showings in a few areas. Beijing performed well in Startup Output and Startup Experience, while Shanghai scored highly on Funding.

Via The Next Web: Silicon Valley is no longer #1 for talent says huge global startup report