By Artemis Psaltoglou on 23 March 2017. Posted in Cities

The use of digital tools and visualisation techniques in the planning is rapidly increasing during the last decade. An article from The Guardian written by Oliver Wainwright and entitled Tinder for cities: how tech is making urban planning more inclusive presents briefly a new wave of digital tools trying to make the urban planning process more transparent, interactive and therefore, inclusive.

Oliver Wainwright starts his article asking readers to imagine how it would be if swiping left or right in our smartphone we could share our opinion about an oversized monster tower block proposed for our street or a carefully designed scheme for a new neighbourhood library. This idea is based on the combination of a dating app and a participatory approach for urban planning, as it is actually trialled in the city of Santa Monica, California.

CitySwipe is the application designed for Santa Monica, presenting citizens with images of potential scenarios and simple yes/no questions and tries to encourage them express their opinion. As Wainwright says,

It might sound superficial, but the questions move on to attitudes towards walking, bike lanes, housing and beyond. It makes the consultation process effortless, compared with the usual feedback mechanisms of filling in lengthy mailed-out response forms, downloading wordy PDFs, or being accosted by a chirpy volunteer with a clipboard. 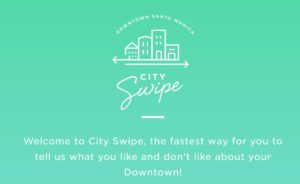 A screenshot from the web application of CitySwipe.

But this is not the only existing tool trying to disrupt the world of town planning. Some of the most featured applications are presented below.

An interactive online map has been developped by the city of Manchester aiming at informing potential development sites across the whole city. The web application aggregates any kind of data ranging from water and transport networks to property prices and brownfield land. Moreover, it offers a total overview of the city’s physical, social and green infrastructure. One of the more interesting features is an additional map that shows proposed development plots, compiling those allocated by the council with sites suggested by residents and developers. In this way, everyone can see what is going on in the area and the planning process is easier for community groups to get involved in.

An interactive platform, developped by the London-based startup Urban Intelligence and named after Ebenezer Howard, collates and digitises national and neighbourhood policies in UK. Allowing users to click on a place on the map and find all the relevant material easily and fast, it brings the contents of dispersed policy documents together in one place.

This US platform has taken the concept of Howard a liitle bit further, building a 3D model that integrates zoning information with financial viability algorithms. Its main objective is to predict the profitability of a scheme in any given scenario, allowing developers to visualise a site’s context and constraints and inform what might be possible to build. The relative simplicity of the US planning codes and the predictability of possible outcomes make it easier for such a tool to be effectively used in this context.

A screenshot of the application. Source: Google Images.

Another example that use the augmented reality (AR) technology to create a digital tool for urban planning is UrbanPlanAR platform. Developed by Heriot-Watt University and Linknode, this platform prove that AR could allow 3D models of new developments to be superimposed on to existing sites. In this way, residents could have the opportunity to walk around future proposals and experience the proposed space. 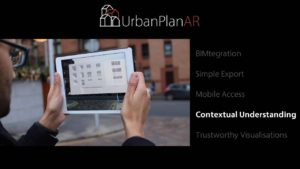 An image from the promotion video of the application. Source: Google Images.

Undoubtedly, the topic around the digitisation of these processes raise a huge debate. As Stefan Webb states,

For cities to achieve similar success with planning data, planners will have to work with user experience experts, service designers, data visualizers and software designers to understand the appropriate level of detail and design for different users of the planning system.
Critics may argue that opening up the system to more users will de-professionalise planning. But, software and artificial intelligence will soon take over many of the lower-value activities in planning anyway. Planners could now actively focus on the higher value, creative components of planning and placemaking, before technology forces them to.

However, critical issues also arise, as not everyone has access to a smartphone or computer or even the digital literacy to interact with online maps. Finally, as Wainwright says, in a world where city plannig becomes digital and data-driven, the question about who is owning and who is profiting from it, is more crucial then ever.