By Artemis Psaltoglou on 5 April 2017. Posted in Cities

The current report is a deliverable of the project REMOURBAN: REgeneration MOdel for accelerating the smart URBAN transformation. The aim of this report is to characterize European cities as a basis for the replication framework of an urban regeneration model developped through the project.

This report represents the first step for the definition of the methodology and framework for replication of the REMOURBAN model, as a holistic approach for city transformation and planning. The methodology developed intends to categorize European cities in five layers according to the REMOURBAN domains for a final generation of groups of cities which show same profile according to an aggregated scheme of indicators. The five layers are the following:

The overall approach for the characterization of European cities is summarized in the figure 1. 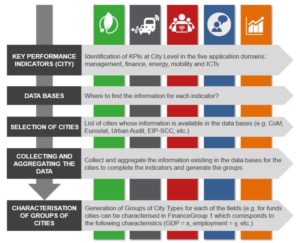 Moreover, the potential for replicating REMOURBAN’s model is evaluated through the identification of a replication zone. In this way, 41 European cities from 18 countries have been characterized and a set of groups of cities with similar profile have been established by each layer and on basis of whole criteria.

Having conducted a global analysis that takes into account all the indicators and layers described aboe, 5 clustersof cities are identified. Table 1 shows the cities which have been considered for the characterization methodology. 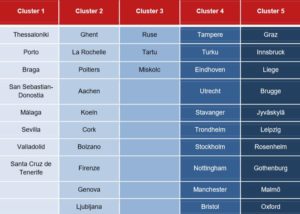 This project aims at developing a sustainable urban regeneration model leveraging the convergence area of energy, mobility and ICT to transform European cities into Smart Cities. It is funded under the European Union’s Horizon 2020 research and innovation programme.