By Artemis Psaltoglou on 19 April 2017. Posted in Collaborative Innovation

Crowdfunding is increasingly being used by cities’ local authorities, usually refered as ‘Civic crowdfunding‘, aiming to democratise the way places are created and funded: from’Civic crowdfunding new street markets and revamped playgrounds, to gardens planted on derelict railway lines.This report by Future Cities Catapult studies the progress of the first wave of local authorities making use of this approach, highlighting the challenges and opportunities of it.

‘Civic crowdfunding’ is a sub-type of crowdfunding through which citizens, in collaboration with government, fund projects providing a community service or deliver public value through a local-area-improvement project. Usually, project ideas come from the crowd and are placed on Internet-based platforms, where potential funders are able to search and make financial contributions to projects that resonate with their areas of interest or values. Together, these actions represent a new model of community involvement, allowing citizens to take an active role in the physical improvement of their neighbourhoods.

In general, most crowdfunding projects do not build infrastructure such as bridges or roads, or fund city services such as waste disposal. They are small scale and aim to build community gardens on vacant plots of land or fund community events. In this context, it is argued that civic crowdfunding should be seen as a way of ‘widening the funnel’ of funding and as a tool to finance small, citizen-led projects to build social resilience and rejuvenate urban areas. 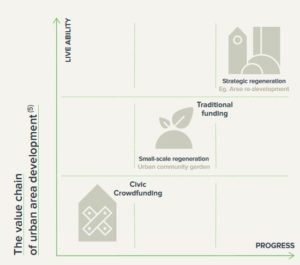 4. Common concerns and barriers to adoption
4.1 What are the potential issues with civic crowdfunding?

5. The future
5.1 What is next for civic crowdfunding?

Concluded, the authors argue that:

Looking to the future, crowdfunding has the potential to revolutionise community engagement processes, giving citizens a more participatory role in civic affairs. Over time, this approach is likely to move from a small-scale experimental exercise into a core method for community engagement across the council’s portfolio of responsibility.