By Artemis Psaltoglou on 30 May 2017. Posted in Platforms, Apps, Solutions 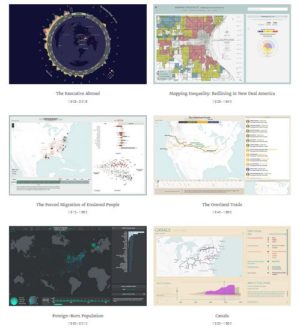 American Panorama is an historical atlas of the United States for the twenty-first century. It combines cutting-edge research with innovative interactive mapping techniques, designed to appeal to anyone with an interest in American history and more generally in cartography. The Digital Scholarship Lab at the University of Richmond has produced a series of incredible online tools that compose an historical atlas of the United States of the last century. The Chronicle of Higher Education already recognized this project in 2016 as one of nine tech innovators for 2016.

A short description of these tools is provided below for some of these maps.

No sitting American president traveled outside the country before Theodore Roosevelt traveled to Panama in 1906 to see the   construction of the Panama Canal. A century later Air Force One regularly carries the head of the executive branch to all corners of the world. The Executive Abroad maps the international trips of presidents and secretaries of state.

The Mapping Inequality project layers the security maps and area descriptions produced between 1935 and 1940 by the Home Owners’ Loan Corporation (HOLC). It introduces viewers to the records of the Home Owners Loan Corporation on a scale that is unprecedented. Visitors can browse over 150 interactive maps and roughly 5000 individual area descriptions to get a view of Depression-era America as developers, realtors, tax assessors, and surveyors saw it—a set of interlocking color-lines, racial groups, and environmental risks. They can also use the maps and area descriptions to draw connections between past state actions (and inactions) and contemporary American problems. 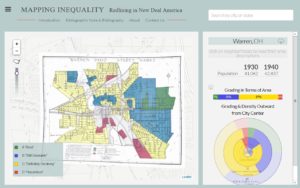 During the 1840s tens of thousands of American migrants made long journeys through the American West seeking land in Oregon, gold in California, and religious liberty in Utah. The map traces the routes of about two dozen migrants over the three trails. Users can read a migrant’s diary and follow their journey on the map.

At all points in its history, a significant proportion of the population of the United States had been born in other countries and regions. This being the case, American history can never be understood by just looking within its borders. The culture and politics of the US have always been profoundly shaped by the material and emotional ties many of its residents have had to the places where they were born. This map will allow you to begin to explore those connections at the basic level of demographic statistics.

American Panorama is created by the Digital Scholarship Lab at the University of Richmond. Robert K. Nelson and Edward L. Ayers serve as editors, Scott Nesbit as an associate editor. Justin Madron manages the project’s spatial data. Nathaniel Ayers leads the design work. The Andrew W. Mellon Foundation and the University of Richmond have funded for American Panorama. Stamen Design developed the software for this project.