By Artemis Psaltoglou on 20 June 2017. Posted in Cities

This report, entitled The Urban Unconnected: Challenging, efforts, and opportunities on the path towards a digital society, explores the levels of urban and rural connectivity across eight major countries and uncovers the challenges faced and the initiatives being implemented by five of the world’s major cities. The research was commissioned by the Wireless Broadband Alliance (WBA) to the research and consulting firm IHS Markit.

The digital divide is still a global and local challenge; the digital divide between individuals who are connected to the internet and those who are not, is a problem faced by many countries around the world. For the scope of this research, an unconnected individual is defined as an individual who does not have access or cannot afford broadband connectivity.

This white paper is the result of the research conducted on the topic of digital divide and urban unconnected across eight leading countries: Brazil, China, Germany, India, Japan, Russia, the UK and the US. The citis researched for this papr are Delhi, London, Moscow, New York and Sao Paolo; they were selected because of their national and global significance in order to provide a global picture with comparative insights collected from different regions. 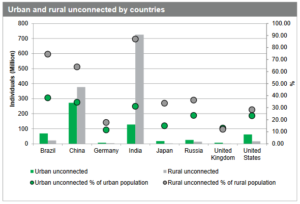 The white paper concludes as follows:

Ensuring that citizens are connected is fundamental for the creation of smart cities and smart nations. Connecting individuals generates new opportunities for civic participation, for economic development, and for personal growth.