This handbook, entitled Advancing a new wave of urban competitiveness: The role of mayors in the rise of innovation districts, offers concrete strategies for mayor and their administration to facilitate the rise of innovation districts. It is the result of a collaborative work between the United States Conference of Mayors, the Brookings Institution, along with the Project for Public Spaces.

Innovation districts are defined as small geographic areas within cities where research universities, medical institutions, and companies cluster and connect with start-ups, accelerators and incubators. These districts are also physically compact, transit-accessible and offer mixed-use housing, office and retail. According to the authors of this handbook:

In this context, this handbook offers a guide for how American cities can become stronger and more competitive by identifying and leveraging innovation districts.

Unlike the hyper-segregated business parks and residential districts that have been constructed for decades in many cities and suburbs worldwide, innovation districts include a range of distinctive traits and assets. More specifically, they contain three categories of assets: 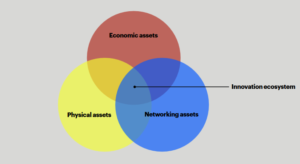 The following illustration depicts the concentration of economic, physical and networking assets within one node of an innovation district – the size of a full city block. While a district commonly ranges in size between 300 acres and 1,000 acres, creating a critical mass at specific nodes or a key corridor, which then extends over time and space, is proving to be a smart and successful strategy.

– Among the physical assets, we can see a walkable street grid, public spaces designed to boost interaction and active and comfortable shops and cafes in the ground floors.

– Among the economic assets, we identify a mix of institutional, company and start-up spaces in close proximity, major research facilities as well as tech transfer offices supporting commercialization.

– Among the networking assets, programming in terms of incubating new enterprises, accelerating learning and strengthening networks is fundamental. 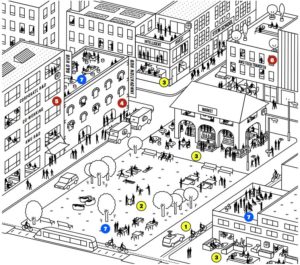 A node of an innovation district and the concentration of economic, physical and networking assets. Source: current handbook.

The handbook concludes by highlighting some of the many vital roles for mayor to play to boost urban competitiveness: