Leading Cities in a World of Disruptive Innovation

By Artemis Psaltoglou on 12 July 2017. Posted in Innovative Cities & Regions

017 Global Cities report takes a look at the world’s leading cities as well as those that are likely to become more important on the global stage. It includes the Global Cities Index, which examines cities’ performance, and the Global Cities Outlook, which evaluates their potential. Together, the Index and Outlook present a unique lens on the world’s largest and most influential cities and those primed to make a strong impact.

Cities are ecosystems for businesses and innovation. The strength of an urban center’s network of businesses, the talent of its citizens, the stability of political institutions, and the creativity of cultural organizations all contribute to an environment in which existing businesses flourish and new businesses are born.

A.T. Kearney’s Global Cities has been collecting data on these and other factors for the world’s most important cities since 2008. This report testifies to the continued strength of many of the world’s largest cities in these domains. Identifying New York City as this year’s leading metropolitan area, it also makes projections about cities’ potential, finding that San Francisco is best positioned to attract and retain global capital, people, and ideas in the coming years. Furthermore, a focus on entrepreneurship and innovation this year has led to the development of four pathways that cities of all kinds can use to foster start-up ecosystems and achieve greater success.

The first 10 cities in the 2016 Index continue to lead in 2017, but the city holding first place has changed once again. New York City lost the top spot to London in 2016 after years of holding the lead. This year, New York regained the first-place ranking, largely by improving in information exchange and a maintaining a higher ranking than London in business activity and political engagement. New York’s  performance in these categories offset London’s strength in cultural experience, allowing New York to unseat London. Both cities have high human capital in
comparison to other cities in the Index. 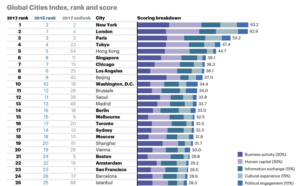 Figure 3 presents the 17 cities that lead or share the lead among the 27 metrics on the Global Cities Index. 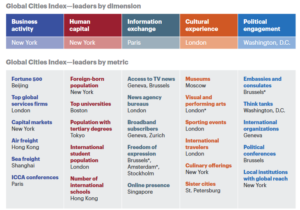 San Francisco Keeps the Lead in the Outlook

Well-known and admired as a center of innovation, San Francisco held its first-place position as a result of continued strength in this domain, with increases in the  number of patents and business incubators. Over the past two years, Paris continued to improve its standing in the Outlook and is now challenging San Francisco and  New York City. Largely propelled by material increases in foreign direct investment and moderate improvements in infrastructure, both New York City and Paris saw increases in the economics domain.2 Paris also saw growth in innovation as a result of more business incubators and substantial growth in private investment from venture capital and private equity firms. 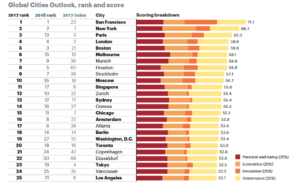 Figure 4 presents the 29 cities that hold or share top spot in each of the 13 indicators in the Global Cities Outlook. 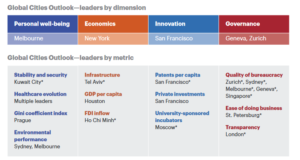 A.T. Kearney is a global management consulting firm with offices in more than 40 countries. A.T. Kearney is a partner-owned firm, committed to helping clients achieve immediate impact and growing advantage on their most mission-critical
issues.