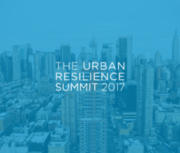 9:00 AM ET | Dr. Rajiv Shah, President of The Rockefeller Foundation, and Michael Berkowitz, President of 100 Resilient Cities, open the Summit.

10:00 AM AM ET | Michael Berkowitz, President of 100 Resilient Cities, will deliver a keynote address on the progress and impact this community has made in the last 4 years.

10:45 AM ET | Bill de Blasio, Mayor of New York City, welcomes Summit participants to the city, and talks about what resilience means to New York.

2:45 PM ET | Bryna Lipper, Senior Vice President and Chief Resilience Advisor for 100 Resilient Cities, will moderate a conversation on the future of cities with a panel of urban experts:

9 AM – 3 PM ET | The Network at Work: From “Building Economic Resilience in Low Income Communities” to “Social Inclusion and Community Engagement,” our networks of resilience practitioners and partners will convene share and spur ideas to help advance resilience-building work in cities.

5:30 PM ET | Toby Kent, Chief Resilience Officer of Melbourne, Australia, will join us for a live conversation about Melbourne’s resilience challenges and the power of working with a global network of practitioners.

10 AM – 5 PM ET | Living Laboratories: From exploring food system vulnerability and resilience in the Bronx to urban biodiversity in Jamaica Bay, sites all around New York City – 14 in total – will be living laboratories for Summit participants to learn about multi-benefit resilience solutions.

8:30 AM ET | Member Cities in Implementation: 32 cities around the world have released urban resilience strategies. Chief Resilience Officers from cities actively implementing resilience strategies will lead a conversation about what they’ve learned and how they’re moving forward.