How Smart is the Smart City? Assessing the Impact of ICT on Cities

By Artemis Psaltoglou on 22 August 2017. Posted in Publications on Intelligent Cities / Smart Cities

This article aims to highlight central challenges faced by planners of smart cities, integrated with ICT, providing a framework to assess the impact of ICT on the form and function of cities, through its effect on people’s spatial behavior patterns. It demonstrates that the ability to simulate individual agents’ behavior through Agent-Based Models (ABM) and how it is affected by enhanced spatial awareness facilitated by ICT, could result in a new understanding of how a city is used, making visible less predictable use patterns and contributing to a more accountable design of urban form and function by planners.

The notion of “smart cities” has gained much popularity over the past few years, fueled by emerging needs and opportunities, and accompanied by considerable political and commercial hype. But in fact, throughout their long history cities have always strived to become “smarter”, in order to mitigate existential challenges such as defending their citizens, providing them with water, disposing of waste, facilitating access, and more. They did so by making use of available (often new) technologies, such as new fortification methods, water supply, sewers, and transportation systems.

The reciprocal relationship between cities and technology has, in turn, shaped urban form, function and use patterns. Cities, in the twenty-first century, are confronted by unprecedented social, economic and environmental challenges. In response, they are attempting to enlist Information and Communication Technologies (ICT) —the current “new” technology —as one of the leading strategies to mitigate urban problems, increase efficiency, reduce costs and enhance the quality of city life. It is the use of this particular technology which is viewed as making cities “smart.”

History teaches us that every such new technology, while advantageous in some ways, also has unforeseen side-and after-effects. Due to the highly ubiquitous and distributed nature of ICT, it affects individuals directly and in highly personalized ways in terms of spatial use patterns, consumption habits, and social interactions. The large number of variables and interactions affected by ICT makes it difficult to predict its explicit and implicit effects on the spatial and social use patterns of people in cities.

What will be the effects, side- and after-effects of integrating ICT in cities, as it becomes ubiquitous and more accessible to both city governments and citizens? How will it transform people’s interactions and behavioral patterns? How will it affect the form, function and —especially —the use of cities? In short —what will be ICT’s impact on cities, and how can we assess it? Current tools used by city planners fail to account for these new types of interactions and transformative behavioral patterns. New tools, capable of forecasting dynamically and at high resolution the behavior of many individual people in a city, are needed. This paper aims to provide a framework to assess the impact of ICT on the form and function of cities, through its effect on people’s spatial behavior patterns. 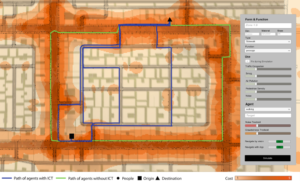