By Artemis Psaltoglou on 30 August 2017. Posted in Platforms, Apps, Solutions

Nowadays, many cities collect measurements from several sources of data about the environment, through IoT and other sensing devices that are placed around the city. However, accessing raw data on its own is not sufficient to meaningfully show the data being collected and to allow a range of users to explore what this data may mean for them. This paper presents a novel approach for visualizing urban data and has been implemented as a pilot in Newcastle-upon-Tyne, UK.

Urban data is being collected in increasing quantities as smart cities around the globe seek to understand and improve their operations and plan their growth. This trend is set to continue as UNICEF predicts that 75% of people will live in cities by the end of the 21st century. One of the aims of Smart City initiatives is to improve inclusivity by communicating more about the city to citizens and organizational stakeholders. The large amounts of data and computational cost of the calculations required to do this mean that cloud-based analytics and visualization is an attractive option as it can deliver results to virtually any client device.

In this article, we describe the design and implementation of the Urban Insight Cloud Engine (UICE) a pilot cloud-based 3D visualization system for Smart Cities that has been created using open software and data sets. This delivers a continuous live view of data collected by Urban Observatory sensors in the city of Newcastle-upon-Tyne, UK. We precede this with a discussion of our experience designing the facilities that exist, are being built, or are being planned to be built, to support our visualization research and production at Newcastle University. 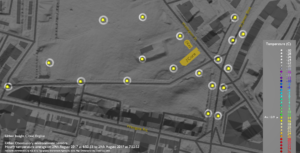 Figure 1. An output from UICE showing the temperature values from sensors around the Science Central site in Newcastle. Source: current paper.