By Artemis Psaltoglou on 5 September 2017. Posted in Cities

As societies and economies around the world have urbanized, they have upended the classic notion of a global city. No longer is the global economy driven by a select few major financial centers like New York, London, and Tokyo. Today, members of a vast and complex network of cities participate in international flows of goods, services, people, capital, and ideas, and thus make distinctive contributions to global growth and opportunity. And as the global economy continues to suffer from what the IMF terms “too slow growth for too long,” efforts to understand and enhance cities’ contributions to growth and prosperity become even more important.

In view of these trends and challenges, this report redefines global cities. It introduces a new typology that builds from a first-of-its-kind database of dozens of indicators, standardized across the world’s 123 largest metro economies, to examine global city economic characteristics, industrial structure, and key competitiveness factors: tradable clusters, innovation, talent, and infrastructure connectivity.

The typology reveals that, indeed, there is no one way to be a global city. Grouped into seven metropolitan clusters, the distinct competitive positions of the world’s largest metro economies become sharper, as do the peers metropolitan areas can look to for common solutions and investments to enhance economic growth. 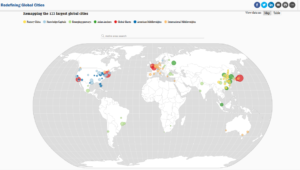