Digital Spillover: Measuring the true impact of the Digital Economy

By Panagiotis Tsarchopoulos on 11 September 2017. Posted in Knowledge Economy

The digital economy is now firmly established as a core driver of global growth. Policy-makers are striving to understand how best to capitalize on the digital economy for the benefit of their citizens. This report, published by Huawei and Oxford Economics,  explores how to measure digital economy and provides a fresh insight into how digital technologies affect economic performance.

Huawei began investing in digital economy research in 2014 and, every year since, has released a Global Connectivity Index report detailing the findings from around the globe. Alongside this, Huawei actively collaborates with academics, think tanks and industry associations to establish an ecosystem for developing methodologies in digital economy.

A truly digital economy is one in which industries, from farming to pharmaceuticals, have embedded digital technologies deep in their production processes to boost economic performance. This report rethinks the challenge of measuring this digital economy, going beyond the conventional metrics to capture the ways in which the benefits of digital investments can spill over from one company to the next, multiplying their final impact. In doing so, it reveals that the digital economy is much larger and more widely spread than previously thought and this casts a new light on how to make plans for the future. 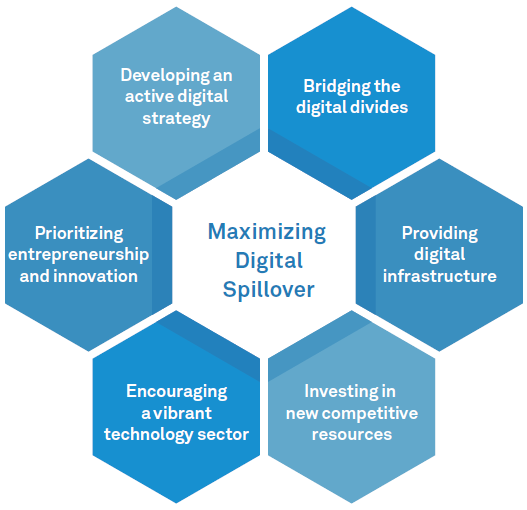 Six key priorities for government, to develop the digital economy