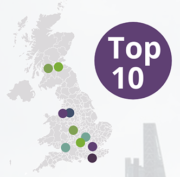 Juniper Research has identified the top 10 smart cities in the UK, with London topping the list. The analysis was conducted over a range of city indices, including transport, healthcare, public safety, energy and productivity. Scores were calculated according to diverse metrics, including present state-of-play variables (such as congestion and crime levels) alongside smart city rollouts, vision and long-term strategy.

Although London is at the top of the UK rankings, it is outperformed by several cities in transport and healthcare service areas. In large part, this is due to the sheer population density and resultant demand placed on services and infrastructure that reduce the efficacy of smart city initiatives relative to others.