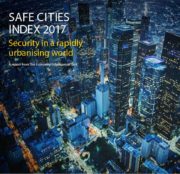 Cities across the globe are growing in size and in terms of how connected they are. Which cities are best at keeping their citizens safe and how do they do it? The Safe Cities Index 2017, created by The Economist Intelligence Unit, covers 60 cities across the globe and defines how to measure security in a rapidly urbanising world. The index consists of 49 indicators covering digital security, health security, infrastructure security and personal security.

The results of the 2017 Safe Cities Index show a sharp divide in overall levels of safety between the fast urbanising developing world and the stagnant developed world. The top three cities in the index are unchanged from 2015, with Tokyo, Tokyo, Singapore and Osaka ranked first, second and third and still separated by mere tenths of a point. Likewise, the remainder of the top ten continues to be comprised of mainly Asian and European cities.

The index’s key findings include the following: