33 Routes to Open Innovation: routes and infographics by Jan Spruijt 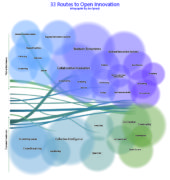 It has been a while since Henry Chesbrough coined the term Open Innovation and formulated it’s definition: “combining internal and external ideas as well as internal and external paths to market to advance the development of new technologies.” (Chesbrough, 2003). In the course of time, the terminology surrounding Open Innovation has evolved alongside developments in management literature and practises. Open Innovation as a paradigm on itself is on its quest to touch base. Rather than taking a (technical) process-oriented approach, Open Innovation is now also about Open Business Models (Chesbrough, 2006), Open Services (Chesbrough, 2010) – both from a more strategic perspective – and practical tools (Vanhaverbeeke, 2017) – more from a tactical or operational point-of-view.

While it could be argued if Open Innovation is the best approach to be used as a general framework to put different strategic, tactical and operational activities into perspective, it is useful to try. So that’s what Jan Spruijt did below: He used the initial Open Innovation framework, based on the innovation funnel, to describe and position a long, but non-exclusive, list of activities that are related to Open Innovation. Of course, also other frameworks could be used to do so, but this seemed like a solid approach.

The infographic includes 33 routes to Open Innovation, ordened by: 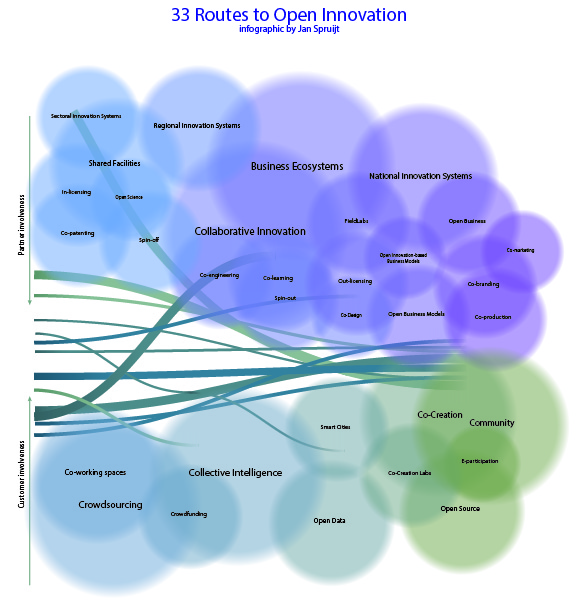 The routes are analytically described below:

The process of sourcing for external knowledge, patents or technology and to formalize the use of that information in your own innovation process. The ‘license’ often include information about the collaborators, how the risks are shared, how the pofits are shared and to what extend the technology or information may or may not be altered or adapted.

The process of collaboration between inventors and joined registration for a patent that may be used for further exploration and exploitation onwards. The effect has been studied by for instance Belderbos and it also an indication of the strength of (inter)regional collaboration, according to OECD.

A spin-off is a form of Open Innovation in the sense that a company can ‘spin-off’ a newly developed technology to the public market for further exploitation by the involved engineers or startup team. It thus a technique to split off an early innovation in the hope that, when it leaves it mother’s wings, it will become more successfull on his own.

Collaborative engineering: a term mainly used in conventional manufacturing and production industry, with a focus on collaboration between two or more partners in the full process of design, engineering and manufacturing with multidisciplinary teams and supply chain integration.

A different approach to open innovation because it is more about HRM and than about the processes itself that become open. Co-learning is about the collaborative learning platforms or trajectories for personnel in order to gain new skills, both on operational level as on more tactical or strategic levels. The knowledge than flows back into the company making the influx of knowledge applicable to business processes. For instance: Faems (2006) and Rowley, Kupiec-Teahan and Leeman (1983)

A spin-out differs from a spin-off in the sense that the technology or startup-team is moving to another ‘mothership’ in the form of an acquisition, merger or (most likely, because the former two usually don’t happen at this early stage) a joint venture.

Basically, this is about having a business model in place that exploits the opportunities that arise because of Open Innovation. Businesses with Open Innovation-based Business Models usually are trying to take the place of innovation intermediaries in Open Innovation networks. They can for instance be inventors with the sole purpose of registering and selling intellectual property. Or they can be network brokers. More information in Weiblen (2014) and Chesbrough (2010) when he describes these companies as merchants.

This approach could also have been placed underneath the funnel: co-design usually happens with both partners and customers and is meant to have a more human-centered design approach in your R&D-funnel. It has become a main topic of research within design thinking. More info: Steen, Manschot & De Koning (2011).

Open Business Models are all-inclusive approaches to Open Innovation: “Open Business Models take a broad perspective of ‘resources’ that are exchanged and shared with the ecosystem. […] It is seen as an ecoystem-aware way of value-creation and capturing. (Weiblen, 2014). As such, firms with an Open Business Model collaborate with its ecoystem by building up partner-networks, platforms. The process of ‘opening up the business model’ is often referred to as Business Model Innovation.

Although the term is almost the same as the before-mentioned approach, ‘Open Business‘ is something completely different. An Open Business embeds a business model that aims to publicly share all data and information. It is related to open source, freeware and open science.

Collaborative branding refers to the fact that a network of organizations join to create a synergetic branding effect. In many case they will create a joint brand that replaces the current product or company brand in order to gain a larger scale effect of the brand. This process is very common in public networks (such as Brainport, the Netherlands, were many companies use the brand Brainport rather than there own branding), but also works out for business-only partnerships, such as the Douwe Egberts and Philips co-brand Senseo. A related term is co-promotion.

Co-production – or co-manufacturing – is largely the same as co-engineering except from the fact that it focuses only the production part of the process, thus enhancing economies of scale and cost reductions in (mass) production environments.

Co-marketing, like co-branding, is about creating a synergetic effect in the commercialization stage of the innovation process. Collaborative marketing focuses on sharing distribution channels and pricing information. It involves joint teams of marketeers bringing to market different products from differnt companies.

The availability of facilities that can be used by networks of companies. From an inbound approach, a company could make use of machine labs, printing labs or hubs with design and production lines; from an outbound approach, companies could share their facilities with others. It contributes to Open Innovation because of the fact that when using these shared facilities, often new combinations or ideas arise. An example of a shared facility is the Holst Centre in Eindhoven.

These are ecosystems that are created and driven by businesses. Another term would be clusters. While business ecosystems are more likely to be created because of commercial opportunities (and as thus may be actually quite ‘closed’ and could prevend Open Innovation from happening), they could also be created with the purpose of Open Innovation in mind.

Same as regional, but than national 😉

Field Labs are collaborative working places where businesses and knowledge institutes meet to create and develop new ideas. It’s primarily a place where students can work with professionals to create new products.

The activity of ‘sourcing’ the crowd: gather opinions, ideas, drafts, suggestions and information from the general public, sometimes – but not always – targeted to specific crowds, such as your current customers or users, a group of elite users or targets platforms (such as designers). Crowdsourcing is effective in the early stages of an innovation process because of the fact that it per definition a diverging activity and it results in a wide variety of options to choose from. The technique is not focused enough to be of use later on in the process. Be aware of having enough resourses avaiable when starting a crowdsourcing campaign, as it may go viral and require lots of hours to manage and react. As it is a form of ‘brainstorming’, the general rules of ‘brainstorming’ also apply to crowdsourcing, which includes taking every idea or opinion seriously.

Based on the popularity of crowdsourcing, crowdfunding was firstly introduced in the beginning of the 21st century in the US. Its principles are the same, but the main ‘source’ you’re looking for is not ideas or opinions, but finance for your project. Crowdfunding platforms, just like crowdsourcing platforms, deal with intellectual property rights, commons and other legal issues that come into play when dealing with using external work for your project. Crowdfunding is a hugely popular technique but has very low success rates, because of the lower entry barrier.

This is more a philosophy than a concrete activity, but at least it is fair to say that the process of opening up your data and tapping into open data is an activity. Increasingly popular in software industry, public institutes and educational institutes, opening up (big) data creates opportunities for organizations that otherwise wouldn’t be able to see and use that data. Searching for and using open data is an effective and efficient Open Innovation tool. Wikipedia states, although it misses a source, that “Some make the case that opening up official information can support technological innovation and economic growth by enabling third parties to develop new kinds of digital applications and services.”

The term of co-creation is used for a whole lot of different purposes, but in the context of Open Innovation is points to the fact that organizations deliberately seek contact with end customers to test and validate new ideas and prototypes and to gather new ideas for bringing the product to market. Although not intended as such, co-creation, if done right, is also an accepted marketing technique: it engages customers with your product.

Communities are groups of highly engaged customers, usually voluntarily involved with your product because of personal interest. Searching for and collaborating with these communities may increase new ideas. Lee et al (2011) argue that communities in the example of Lego, have an automatic filtering, for instance through fora, of ideas and these ideas are as such much more worth looking at than for instance ideas generated by crowdsourcing.

Primarily a public or governmental activity, e-participation tries to involve the public in (usually) gathering feedback on delivered services. It also works for companies because gathering feedback helps in validating and incrementally increasing the quality of products.

Much related to Open Data, Open Source is a philosophy adopted by software engineers to generate sources codes that are freely available. This doesn’t mean that there isn’t any commercial activity involved: while the source code may be open to the public for use, only developers will understand it – and thus commercial activities can be exploited when making the software available for the public. Examples of Open Source projects are Wikipedia and WordPress.

Increasingly popular, mainly because of the growing number of freelancers and self-employed personal, co-working spaces are actually an excellent place to start networking and source for new ideas. Because of the diversity of specialists working in those places, you are more likely to gather diverse ideas, which work best in the early stages of the inonvation process. In cities such as Amsterdam co-working spaces pop-up all the time, so it’s worth to search for a space that is as diverse as possible and offers also opportunities to chat and discuss.

The concept of Smart Cities is based around the ICT-perspective on ‘intelligence’: a highly digital, hyperconnected accessible information society in which broadband is present and the main industry focuses on services and online activities. Smart Cities are a cosmopolitan view on the world, but being located in one of them opens up a wide range of opportunities for innovation.

The last route to Open Innovation focuses on the end users of your product or service. User engagement is widely researched as a highly effective approach to Open Innovation. This involves (creative) user research (Kumar) and Lead User Involvement (Bogers).