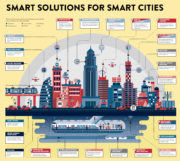 The innovations that are being tested and implemented in smart city initiatives across the world, based on means such as data and digital technology in order to make cities more efficient and liveable, come with the danger of deepening inequality by excluding digitally marginalized groups.

The danger exists for the poor, homeless, disabled and elderly, along with other vulnerable categories that are sometimes called “offline populations” because they usually do not have access to or are not able to properly use smartphones or tables, which are the primary interface of the modern city. These groups of smart city inhabitants can benefit from applications running in the background of daily life, such as more efficient traffic flows, but do not have access to the full range of smart city programs and services, a situation which in effect creates a “digital divide”.

This danger can be prevented if local governments recognize that tech-driven solutions are as important to the poor as they are to the affluent, and city planners begin to deploy technology in ways that make cities more inclusive to offline populations.

There are several examples of this already, where smart city technologies are being used for inclusion: interagency data platforms used to provide door-to-door outreach for residents in need of assistance in New York, analytics used to prioritize shelter space for the homeless in Santa Clara County, California, GPS used to provide postal addressed for slum dwellers in informal communities in Kolkata, India, an app using Bluetooth to help visually impaired London Underground users navigate.

Such examples, however, represent only a fraction of what is possible to do for vulnerable populations by using smart technologies properly. Public health and care for the elderly are other fields in which the implementation of smart city solutions can make a real difference and improve on the inclusiveness of cities.

The original article can be found on the World Economic Forum.