By Artemis Psaltoglou on 18 September 2018. Posted in Cities

UN Habitat has published a new report, The State of African Cities 2018: The Geography of African Investment, that aims to contribute to development policies that can turn African cities into more attractive, competitive and resilient foreign direct investment (FDI) destinations. It also provides guidance on the choices needed to be made by cities in their pursuit of FDI, as well as facilitate understanding of the complexity of global investment in Africa.

This State of African Cities 2018 report is the fourth publication on Africa in UN-Habitat’s Regional State of the Cities report series. It follows a first report, published in 2008, that benchmarked urban issues in Africa. The subsequent 2010 and 2014 publications revealed that Africa should identify its own form of urbanism, rather than following the urban paradigms of the advanced economies in the 1950s and 1960s. Instead, African cities need to adjust to the very different realities of the early 21st century.

This report differs from the traditional series and is not about urban planning. It follows the Addis Ababa Action Plan of Financing by seeking to outline how Africa can consider financing its development strategy through foreign direct investment (FDI) in African cities.

In seeking to address how to boost African urban economies, the report sheds light on how to foster the urban dimension of Africa’s structural transformation with industrialization as the main vehicle for inclusive growth. The research conducted for this report is highly empirical, rigorously evidence-based and provides neverbefore seen data and information. It links urbanization to sustainable national development by providing credible options for poverty and unemployment alleviation, highlighting the role of FDI in creating new economic activities, and the contribution of partnerships between the public and private sectors to urban investment and the creation of decent jobs. 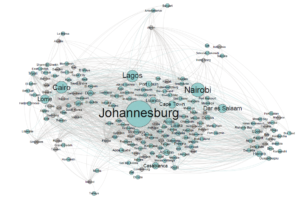 Network analysis map of the strategic positions of African cities within the global FDI system (2003-2016).

At the same time, the report shows that FDI can exacerbate inequality unless governments harness it correctly. In this regard, the report critically considers the benefits of FDI into job-rich and higher productivity sectors (e.g. IT and manufacturing) compared to capital intensive sectors with limited value addition (e.g. resources). The report also shows that African governments need to connect FDI attraction to sustainable urbanisation by underpinning it with robust national urban policies, urban planning, and financial and legal systems.

The report was conceived and produced through a cooperation between the Institute for Housing and Urban Development Studies (IHS) at the Erasmus University Rotterdam (responsible as lead institution for the research) and UN-Habitat (responsible for overall coordination).