New report about the economic links between cities and towns

By Artemis Psaltoglou on 24 September 2018. Posted in Cities

The report Talk of the Town: The economic links between cities and towns was recently published by the Centre for Cities in UK. Its main objective is to understand how British cities, towns and villages interact and what is the impact they have on each other. Assuming these interactions affect the standards of living for people across the country and the national economy as a whole, this report shows that cities are home to the majority of the economy provides policy recommendation.

This research sets out the nature of the interactions between cities, towns and villages. It shows that the impact of cities goes well beyond their boundaries in a number of ways. Most importantly, it demonstrates that cities are home to the majority of the economy for UK. Despite covering just 9 per cent of land, they are home to 55 per cent of Britain’s businesses and 60 per cent of its jobs, with this concentration increasing in the last two decades.

Cities also shape and impact on the economies and economic outcomes of the places around them. UK’s most successful cities both provide jobs for people in neighbouring towns and influence how attractive these towns are to business investment.

This is good news for those towns located close to successful cities which benefit from their success. But this research shows that the underperformance of a number of cities is bad news not just for that city’s residents and the national economy overall, but for the residents in towns around them too. This poor performance restricts the employment opportunities cities are able to offer the residents of their neighbouring towns, and it reduces the town’s chances of attracting in higher-skilled, better-paid work. 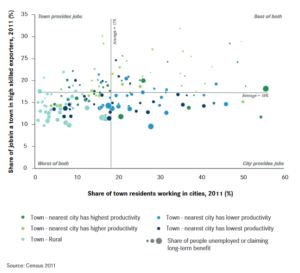 Figure 1. Town economic outcomes in relation to its economy and labour links with cities, 2011.

A policy approach to the myriad economies that make up the UK needs to acknowledge and work with the network that these economies have created, and reflect their different roles. This report represents a starting point towards a better understanding of the aforementioned issues and recommends that policy should: