By Artemis Psaltoglou on 14 January 2019. Posted in Platforms, Apps, Solutions

Smarticipate is a research project revolved around the development of the smarticipate platform, a web-connected solution that allows citizens to interact in a new way with their local government. Based upon the idea that smartphones and web applications are widely used in our daily life, this project aims at opening up the process of creating new applications. So, this guide is a step-by-step manual explaining how the smarticipate platform can support the creation of new apps aiming to make cities more liveable, greener and smarter.

According to the Smarticipate approach, an urban app consists of 3 elements; features, data and rules. By analysing a problem and its possible solution, what is called the urban story in this guide, the elements of an application can be specified.

A feature is a tool in the app that enables users to act. They facilitate online communication between different stakeholders and make it possible to reach out to a wider audience. The smarticipate platform provides you with a set of built-in features which you can activate for your app. For example, as show in the following figure, some features are sharing, liking and commenting on proposals via social media.

On behalf of the city of Hamburg, Nicole Schubbe stated that:

The city of Hamburg has huge amounts of open data accessible to citizens and entrepreneurs via our Transparency Portal. A great first step! However, our ambition is that more people use the data and transform it into usable applications which support the decision-making. 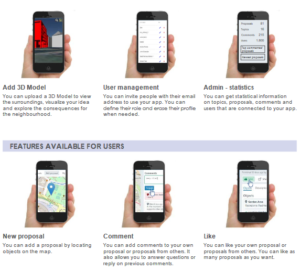 The guide is structured as follows:

In the smarticipate platform, there are also some prototype applications that could be easily adapted to other cities. These applications include:

The ‘How to create a new app’ manual for opening up the smart city is made possible by all smarticipate partners: Fraunhofer IGD, University of the West of England, Austrian Institute of Technology, GeoVille Informationssysteme und Datenverarbeitung GmbH, ICLEI, WeLoveTheCity BV, Freie und Hansestadt Hamburg, Roma Capitale, Royal Borough of Kensington and Chelsea and Wetransform GmbH