By Danai Toursoglou Papalexandridou on 15 May 2020. Posted in Cities, Intelligent Cities / Smart Cities 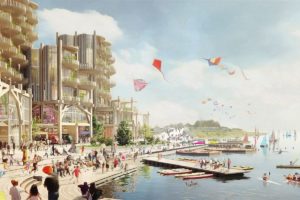 The project consists of a highly controversial topic, due to privacy concerns. Sidewalk Labs, a Google affiliate, designed a large-scale project towards the transformation of the Waterfront of Toronto into a smart city.

The project was running for over 2 years and was designed to offer a new approach to future urban development. It soon provoked a wide discussion among the residents of Toronto as well as within the research community.

For some analysts, the suspension was a positive development, due to the questionable policies it was proposing. The potential exposure and misuse of personal data, created a big opposition to its realisation. This, primarily resulted in its scale-back and the characterisation of any information collected as a public asset.

For others, the cancelation signifies a lost opportunity of an interesting experiment and approach on smart cities. It was analysed as a green city initiative that would be fully integrating transportation systems and provide affordable housing.

Both the initial proposal and discussions as well as its cancelation, signify changes on future approaches on smart city development.

Sidewalk Labs CEO Daniel L. Doctoroff stated “I believe that the ideas we have developed over the last two-and-a-half years will represent a meaningful contribution to the work of tackling big urban problems, particularly in the areas of affordability and sustainability. This is a vital societal endeavour, and Sidewalk Labs will continue our work to contribute to it.”