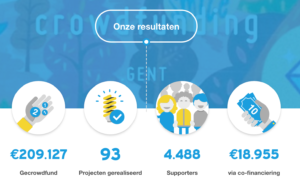 This paper analyses the dynamics of government initiated civic crowdfunding platforms, with regards to participation inequalities and their defining dimensions. Such platforms are considered by the authors as governmental responses for bottom-up peer-to-peer support mechanisms related to urban innovation, which also allows top-down governance and governmental support systems for civic entrepreneurship.

Baccarne, Evens and De Marez carry out a single case study, combining qualitative and quantitative research methods. The single case study entails the study of a single civic crowdfunding platform in the city of Ghent, Belgium, initiated and controlled by a single local government to support bottom-up urban innovation. Building upon this central case, they performed qualitative research, to study the perspective of citizen users who instigated crowdfunding campaigns on the platform.

The authors’ approach is twofold: First, they investigate the role of political efficacy in explaining participation inequalities. Second, they study the government’s role in these multi-actor collaborations in a more open way, in order to better understand the intertwined inter-actor dynamics of the institutionalized aspect of government-owned civic crowdfunding processes.

Considering traditional factors that might explain both participation inequalities as well as measures of the digital divide, this study investigates the role of six central socio-demographic variables in explaining funding intentions: gender, age, income, education, occupation, and residency. Regarding digital citizenship, the relationship between crowdfunding intention and two metrics of digital literacy are taken into account.

The results showcase the limited importance of socio-demographic aspects  when explaining differences in funding intentions, besides the (small, but significant) role of age  (R2=0.04). Although aspects of digital citizenship (and digital divides) correlate well with funding intentions, these aspects have equally limited predictive power regarding such intentions (R2=0.06), similar to attitudes towards the government  (R2=0.08). An important aspect in explaining differences in funding intention, however, is the gratification sought, which reveals community altruism as the most important predictor of funding behaviour (R2=0.16). Finally, aspects related to civic engagement, especially civic identity, appear to be the most determining (R2=0.19). From a managerial perspective, considering the role of the government in leveraging social entrepreneurship though civic crowdfunding, the results show that government-ownership has a trust-enhancing role.

Although participation in such ICT-enabled interaction interfaces could reinforce digital inequalities and existing power balances, this research shows a more nuanced perspective, in which online and offline practices intertwine. Civic crowdfunding formulates a new mode of civic engagement in which institutional involvement acts as a trust broker between civic funders and civic entrepreneurs, as well as adding legitimacy to innovation processes in the public sphere. This research shows that online civic crowdfunding itself can be considered as an innovative intervention that stimulates a new generation of network ties that extend individual civic crowdfunding campaigns.