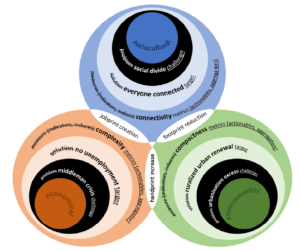 This paper studies the current delivery of strategic smart city agendas and the top-down means that are used to measure and present their performance. People’s Smart City Dashboard (PSCD) is proposed as a mean to reimagine smart cities in a more empowering and collaborative manner, using Blockchain. People-centric measurement tools are designed, supporting a bottom-up and blockchain-based implementation of smart cities.

According to this paper, smart city agendas have failed in their promise of being citizen-centric instruments due to their top-down approach in the measurement and delivery phase. This results in a poor representation of citizens’ needs. People’s Smart City Dashboard (PSCD) is proposed as a community-led alternative using blockchain, a technology community-led by design. Citizens are assigned responsible for the implementation of smart cities agendas in collaboration with the society as a whole. The dashboard proposed in this paper includes a role-based mechanism that enables the non-motivated and non-engaged segments of society by giving them an essential implementation role.

The author proposes a format of metrics as an alternative to indicators and indices, to better visualise the newly achieved benefit-realisation, the Activators and Aggregators. Activators measure people’s Actions and involve citizens in their creation, functioning as an alternative to Indicators. Aggregators measure government’s follow-up Actions and are to replace conventional Indices. According to the author, the benefit-realisation brought by this new set of metrics is a more ‘dialoguing’ version of typical mayor’s dashboards. Activators and Aggregators have an Action-based nature and are digitally enabled. Citizens will be reporting their sustainability actions into the People’s Smart City Dashboard in a similar way as they would do to a mayor’s dashboard but governed community-led and imputed solely by citizens. The dashboard will be showing in real time the delivery of smart city agendas.

According to this paper, the community-led implementation mechanisms introduced by the PSCD are a novel form of public governance that takes traditional devolution further by switching roles between people and government. The dashboard proposed, benefits people’s empowerment which, in turn, will improve sense of ownership of smart city policies and therefore help succeeding in increasing adoption of urban agendas.

People’s Smart City Dashboard can be summarised as the informational representation of the performance of a new form of citizenship governance. It consists of community-led implemented instruments which are delivered through people’s Actions and enabled by blockchain’s collaborative functionalities.