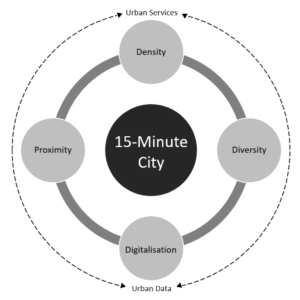 With the concept of “15-Minute City” gaining ground in popular media following the impacts of COVID19 and its subsequent adoption at policy level, the present paper introduces the concept, its origins, intent and future directions. The concept, offering a novel perspective of “chrono-urbanism”, adds to the existing thematic of Smart Cities and the rhetoric of building more humane urban fabrics and safer, more resilient, sustainable and inclusive cities, as depicted in the Sustainable Development Goal 11 of the United Nations.

The socio-economic impacts on cities during the COVID-19 pandemic have led to increasing inequalities and record numbers of unemployment around the world. While cities endure lockdowns in order to ensure decent levels of health, the challenges linked to the unfolding of the pandemic have led to the need for a radical re-think of the city. According to the authors, these events resulted to the re-emergence of the concept of “15-Minute City”,  initially proposed in 2016 by Carlos Moreno.

This paper predicts that we will see long-term changes in cities, prompt the emergence of new socio-economic structures and force new urban planning models that need to adapt to such trends to ensure a safe and sustainable urban future. Most cities, as currently planned and constituted, need to be re-structured to ensure that in the future basic services are available at accessible distances, that human interaction would not be disrupted and that cycling and walking would be facilitated to ensure that such healthy protocols would be sustainably observed. According to this paper, changes in the urban environment worldwide and the reaction of the residents showcase the importance of investing in proximity-based needs rather than rolling out further investments in large infrastructural projects as means of economic support through COVID-19 relief packages. Relevant interventions include bicycle lanes and walking paths, parks, pop-up stores, houses for homeless among others and are mapped in North America, South America, EU and Oceania in this research.

The authors further advocate for planning concepts that would reorient urban development into paths that support both environmental and equitable responses within the smart city concept, and they believe that the proposed 15-Minute City concept could be among the fitting models.

Even though the concept has gained a rapid adoption by global cities, they support that the operationalization of the 15-min city will require additional studies in order to scrutinize the respective importance and the connections of density, proximity, diversity and digitalization. To do so, it will be necessary to mobilize up-to-date research methods and to discuss its ability to complement classical modelization approaches. At the same time, further research should be implemented to showcase how the idea and its elements can be replicated in cities within the global south and those that may be financially constrained to undertake the extensive urban regeneration exercise that this kind of planning model demands.