By Anne Davis on 16 March 2021. Posted in Smart Buildings 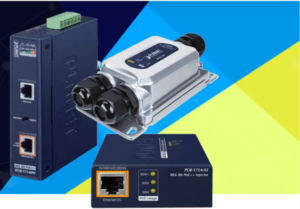 The fact that security systems (such as video surveillance, access control, and intrusion protection) are increasingly using digital communications over an Internet Protocol (IP) network has led to questions about how this technology works. The purpose of this post is to answer the most common questions.

What kind of backup power do I need for my security system?
Any devices, particularly those critical to safety, must be backed up by an Uninterruptible Power Supply (UPS), also called a Battery Backup. A UPS is a device that has a built-in battery that charges when plugged into a power outlet. Should the power to your security device stop for some reason, the UPS will continue supplying power to any devices to which it is connected. The amount of time a UPS will keep your system working depends on the number of devices it is connected to and the amount of power they draw.

Determining what size UPS you need entails things like the minimum and maximum run time and the specifications of the device you want to backup. There is a nifty online tool that was developed by Minuteman that calculates load when information regarding the device in question is input. You can find this tool at sizemyups.com.

Does the Ethernet switch or router need backup?
Yes. When installing a dedicated network for an IP security system, a UPS backup is needed for the switch, router or cable, or SDL modem. It should also be determined that the UPS has enough power to back up the system and support Power over Ethernet (PoE) for PoE devices.

When connecting an IP security system over an existing Ethernet network, a UPS will not be required as the network should already have a backup.

What is PoE, and how does it work?
One of the most significant advantages of IP is that the security industry can now use PoE. This technology supplies electric power over twisted-pair Ethernet cable to powered devices (PDs)—such as the security systems being discussed in this article. One of the most significant benefits of PoE is that it allows the installation of remote or outside devices without the need to connect to AC power outlets.

Many PoE switches and routers have PoE capability. When installing a new switch or router to an IP security system, it makes sense to purchase one that supports PoE. PoE reduces both cost and installation time by eliminating the need for traditional AC outlets for every PD.

If an existing switch or router does not support PoE, this capability can be added using a mid-span device, such as a PoE hub or PoE injector.

What is the distance limit between a PoE PSE and the PoE PD it is powering?
The maximum distance between a PoE PSE and a PoE PD is 100 meters (or 328 feet). This distance can be increased using a PoE extender that can connect large network settings like shopping malls, business and academic campuses, hotels, sporting venues, etc.

Two crucial things to note are (a) the network switch or router and all connected PoE devices must conform to the same IEEE standard, and (b) the total amount of power needed for all devices must never exceed the maximum capacity of the system.

What is SNMP?
Simple Network Management Protocol (SNMP) allows PoE devices on a network to communicate, even if the devices have different hardware and run different software. SNMP enables network management by providing the ability to identify devices, monitor network performance, track any network changes, and determine the status of network devices in real-time.

What other devices can be powered with PoE?
When PoE first became available, the number of PoE devices was limited. However, PoE wattage has increased over the years, and the possibilities for PoE are almost endless. Here are several examples (see, Symmetry Electronics: A List of Devices That Can Be Powered With PoE) of PoE devices currently on the market:

Can PoE damage devices?
No. PoE switches and injectors will NOT damage any devices—even if the devices are not designed for PoE applications. This feature is built into all IEEE 502.3af/at/bt-compliant devices.

Are special cables needed for PoE?
No. The same cabling used for regular, non-PoE networks is also used for PoE—that is, Ethernet cable that meets Cat5e (or better) standards with RJ45 connectors.

Why should I use PoE for my IP security system?
To optimize time and cost. PoE technology eliminates the need to install AC power outlets for network equipment such as switches, routers, and security devices like IP cameras. With PoE, only one source of power is required, even with multiple devices, which reduces the amount of cabling needed. Also, when it comes to IP security cameras, PoE provides the highest quality images available because Ethernet supports higher bandwidth than a wireless connection.