Intelligent / smart cities constitute a breakthrough in contemporary urban development and planning process. Two major driving forces sustained the paradigm shift towards intelligent cities. On the one hand, the rising knowledge and innovation economy that sustains contemporary economic development worldwide, and on the other hand, the spread of the Internet and the web as major technological innovations of our era. Intelligent cities are expected to contribute to the challenges faced by the cities globally and to provide more efficient solutions:

It becomes urgent to understand the sources and drivers of city intelligence that assure a higher efficiency in addressing wicked problems of contemporary urban agglomerations. The Spatial Intelligence of cities refers to informational and cognitive processes such as information collection and processing, real-time alert, forecasting, learning, collective intelligence, distributed problem solving, which characterize “intelligent” or “smart” cities. The emphasis on the spatial dimension denotes that urban space and the agglomeration are preconditions of this form of intelligence. However, the concept refers also to the combined deployment of ICTs, institutional settings for knowledge and innovation, and physical infrastructure of cities, to increase the problem-solving capability of a community. 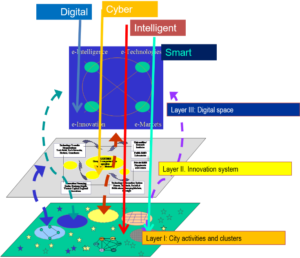 The spatial intelligence of cities results from the standard model of intelligent cities and involves all layers:

URENIO has participated in various research projects related to the definition of intelligent city architectures for European cities. In particular: 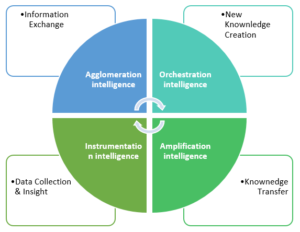 During these projects, URENIO has analysed the variable geometries of digital, cyber, smart, and intelligent cities and the way that a large number of digital applications actualise many mechanisms which both give structure to and sustain city intelligence. The analysis leads to the identification of four different architectures of spatial intelligence:

URENIO also focuses on the architecture of the Digital Space of intelligence cities. This architecture emphasizes the role of the ICT components, which play individual roles within the system (i.e., communication, authentication, data repositories, etc.), as well as on the ways that all these components interact in order to establish the expected entire intelligent city scope. 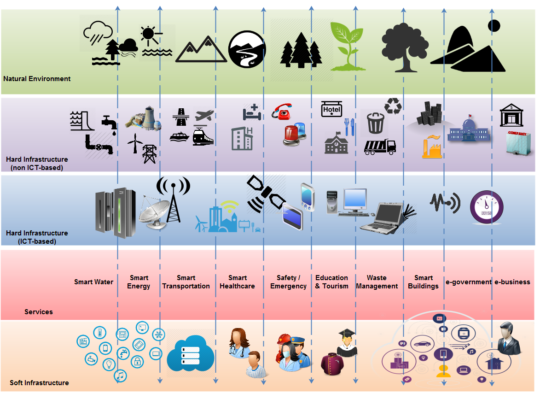 URENIO helps cities and communities to successfully interconnect the physical, institutional and digital space of the city and to define the most appropriate combination of the different intelligent city components according to their needs and objectives. Moreover, URENIO develops web platforms with modular, extensible architectures that offer a variety of smart city services.